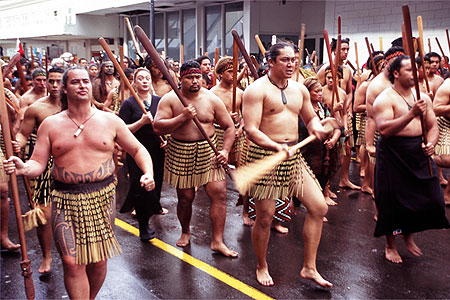 The Maori are the indigenous people of New Zealand. They are Polynesian and make up around 15 percent of the country's population. Te Reo Maori is their native language which is related to Tahitian and Hawaiian. It is believed that the Maori migrated to New Zealand from elsewhere in Polynesia around the 9th century to 13th century AD.

Dutch navigator Abel Tasman was the first European to encounter the Maori. Four members of his crew were killed in a bloody encounter in 1642. In 1769 British explorer James Cook established friendly relations with some Maori. By 1800, visits by European ships to New Zealand became frequent which inflicted a heavy death toll by disease on Maori.

A greater threat to Maori however were their own tribal conflicts called the Musket Wars which raged between 1807–1842. This included around 500 battles where Maori tribes fought each other resulting in heavy tolls on each tribe. Maori also attacked another indigenous people called the Moriori which all but wiped them out. After the Musket Wars there was a period of relative peace until 1845 when the New Zealand Wars broke out due to land disputes which lasted till 1872. These wars were initially fought between British troops and Māori warriors followed by a New Zealand government military force, including local militia, rifle volunteer groups, and Forest Rangers. After these wars and the death toll due to disease, the Maori population dropped to a low 100,000 persons or thereabouts.

In 1840 representatives of Britain and Maori chiefs signed the Treaty of Waitangi. This treaty established British rule of New Zealand and granted the Maori, British citizenship, while also recognising Maori land rights. Today, some of the treaty's provisions are used in disputes over confiscated land that took place resulting in return of land and/or a financial payout.

There are a number of theories about the origins of the Maori. Their own legends say that the Maori came from "Hawaiki", the legendary homeland. Some speculate that the island of Hawaiki could be near Hawaii. The most accepted theory suggests that the Maori migrated to New Zealand over a long period of time. Originating in China, then on to Taiwan, the Philippines, Indonesia, Melanesia, Fiji, Samoa, the Marquesas, then south-west to Tahiti, the Cook Islands, and finally arriving in New Zealand about 1000 years ago. The gave the name Aotearoa to this land whichy tranlsated means, 'The Land of the Long White Cloud'.

When the Maori arrived in Aotearoa they were confronted with a land quite different to tropical Polynesia. New Zealand was not only colder, but also much bigger in area than any other South Pacific island they encountered. In fact, New Zealand is bigger than the all the remaining Polynesian Islands put together. There was also a huge variation in landscapes and climate. Upon arrival, they found dense forests and long coastlines. But they also found high mountainous terrain with snow. And not just a few snow capped mountains. The Southern Alps in the South Island are 600 kms in length and comparable in size to the European Alps. The North Island also has a long chain of mountains and numerous volcanoes. Both islands also contain huge lakes and are covered in dense forests. They also found unusual fauna including the largest bird in the world the Giant Moa and the world's greatest ever aerial predator, the giant Haast Eagle.

Some researchers speculate that the Maori discovered Aotearoa by chance or luck due to the country's extreme isolation. The suggestion is that they were blown off course in one of their navigations. Contrary to that belief is a small amount of evidence that points to the Maori possessing a sophisticated knowledge of the stars and ocean currents enabling them to use them as a map. This leads to the idea that they were puposefully exploring the region.

The term "Whakapapa" is used to describe Maori genealogy. The word "Papa" doesn't mean father as you might expect, but rather anything broad, flat, and hard such as a flat rock. So whakapapa means to place in layers and this is the way that different orders of generations are understood. One upon another. The Maori term for descendant is uri, its precise meaning is offspring or issue.

Before the coming of the Pakeha (non-Maori) to New Zealand, all literature in Maori was orally passed onto succeeding generations. This included many legends and waiata (song). Although some stories are also told within the carvings that adorn their whare (houses).

The most recognised Maori tradition today is the "Haka" which is a war dance. Performed before the onset of war, today it has been immortalised by New Zealand's Rugby Team the All Blacks, who perform this dance before every game.

The traditional Maori welcome is called a powhiri. This involves a hongi which is a greeting where you press noses instead of a kiss.

A traditional form of Maori cooking called a Hangi is a feast cooked inside the earth. Stones are heated in a fire inside a dug out pit and are then covered in cabbage leaves or watercress to stop the food that is placed on top from burning. Mutton, pork, chicken, potatoes, and kumera and (a sweet potato) are then unusually lowered into the pit in a basket. The food is covered with Mutton cloth or similar and traditionally with flax. Finally earth is placed on top to keep in the heat and steam inside for about 3 3 hours. The Hangi is still a popular way to cook food today and makes for a viable alternative to a barbecue. Although, the hangi is more suited to larger groups of people due to taking longer to prepare. The unique taste of food cooked in a Hangi can best be described as steamed food with an earthen flavour.

Another prominent feature of Maori culture is the striking facial tattoos. Known as "moko" it was and is a predominantly a male activity. Female forms of moko were restricted to the chin area, the upper lip, and sometimes the nostrils. Today the moko lives on as an increasing number of Maori opt to receive it in an effort to connect deeper with their cultural identity and in an effort to preserve their culture.

The present Maori population is around 600,000 comprising about 15% of the country's population. They live in all parts of New Zealand, but predominately in the North Island where a warmer climate prevails. The Maori have assimilated well into what has become a prosperous multicultural society. Despite that, they have kept their culture intact in the face of inevitable changes that come with living in a modern western nation.